Strong and barely controllable emotions. That’s what just happened. And glorious, flawed, beautiful people coming together across state lines and oceans and centuries and all kinds of other facts and forces and supposedly impermeable laws of nature and humankind.

Let me try to explain, if I can. Buckle up.

On April 14th, we held our first-ever fundraiser on American soil in Arnoldsville, Georgia. It was at this event that Stan Mullins, a painter and sculptor who creates amazing, gigantic works of art, turned to me, bemused, and said, “This is cool. This is like Finster meets Fellini.”

What Stan meant by “this” was the gathering of 60 plus people who came together that night to celebrate art, optimism and our shared passion for a little corner of Tuscany where extraordinary things have tended to happen to ordinary folks like us for the last 1,000 years.

Yes, it was a fundraiser for Save San Filippino. And, yes, we raised a good bit of money for the cause. But, it was more than that. It was one of those rare moments in time when everyone present remembered how good it feels to do good, how good it feels to trust your better angels, and how right your own lifelong instincts toward pursuing artistic and altruistic and spiritual goals can be.

We need some grounding facts here, before your attention completely dissipates amidst all my ethereal strainings. Sorry. Life’s hard to describe sometimes. But when nights like this happen, you have to try. . . .

We held this first fundraiser at this particular event space for several reasons. Arnoldsville is very close to Athens, where Rita and I went to college at the University of Georgia (UGA). Arnoldsville is also where Rita’s paternal grandparents lived and where her father Henry and her beloved Uncle Dale and her other eight aunts and uncles all grew up. Her fabulous aunt Fern still lives there. She greatly helped us with every aspect of this event. (And I could write a series of other blog posts about sweet Aunt Hazel, who did all the cooking, and Rita’s posse of girlfriends from Nashville who played key roles with the auction and raffle.)

Rita has many fond and vivid childhood memories of visiting her extended family in this little country town. In the summertime, Rita and her two siblings would often walk one mile down the dusty dirt road from her grandparents’ home to this very event venue, although back then it was the community’s beloved Paul Butts’ General Store. There, back then, Rita bought ice cold “co-colas” and dipped ice cream. Hold these thoughts.

UGA, just ten minutes from Arnoldsville, has had a study abroad program in Cortona, Italy for going on fifty years now. Generations of young art students—and students of all kinds—have traveled to Cortona all this time. For many of them, Cortona and the surrounding towns and landscapes of Tuscany were a revelation and an inspiration. It was there that they discovered not only that they could “do” art but, more importantly, that they were, in fact, artists. Or, at least they discovered that they might just be willing to dedicate the rest of their lives to finding out if they could do artistic justice to the strange and ambitious stirrings within them that were first sparked and so lovingly nurtured in Cortona and its neighboring environs. Hold these thoughts, too.

In the summer of 2010, our oldest son Zach, who also attended UGA, studied art and landscape architecture in Cortona. Rita visited him there. She and Zach explored the area around Cortona and discovered the neighboring town of Castiglion Fiorentino. After several more trips, Rita and I both fell in love with “CF,” as we call it. We bought a small apartment and started going as often as we could. That’s how we discovered the abandoned San Filippino chapel. More thoughts for you to hold.

In November of 2017, Stan Mullins saw a two-minute video on Facebook about some beautiful little abandoned baroque chapel named San Filippino in Castiglion Fiorentino, Italy that some couple in Nashville, Tennessee was trying to save. Stan, having studied in Cortona, was interested. Stan reached out to Rita. Come to find out, years ago, Stan had created a monumental 5-foot x 8-foot painting depicting the strange and wondrous life story of Saint Margaret of Cortona. After fifteen minutes on the phone with Rita, Stan knew in his bones that he needed to help us restore this church and that he would donate proceeds from the sale of this painting and prints of this painting to the cause. Stan was all in, immediately. Hold this thought.

In February of 2018, Aunt Fern told Rita about Mary Nouri, a fellow Arnoldsville native who had made it her mission to restore the town’s old, abandoned general store and re-make it into a thriving community center where artists and musicians and book-lovers and good-hearted folks of all stripes could gather for fun and fellowship. Rita and Mary connected. They both quickly realized the wonderful serendipity of their similar missions. Mary announced that there would be a fundraiser in Arnoldsville and Rita agreed, wholeheartedly, overcome with all the many emotions and connections and positive feelings animating Mary and Stan and Fern and everyone else in Athens and Atlanta and Nashville and Castiglion Fiorentino who was hearing about these nascent plans as they quickly took shape.

This is what positive momentum feels like, Rita told me at the time. And she was right.

Soon, other artists with Cortona connections came calling. They found out about Save San Filippino and the Arnoldsville fundraiser and Rita and what was animating her, and they wanted in. They felt a connection. They wanted to help. John Cleaveland and Alan Campbell donated a painting and a print for the silent auction. Fellow artist and Cortona alum Erin McIntosh has since joined in as well. All four artists are committed to donating more works and to helping the cause in any way they can. They, too, are all in.

And I must mention here yet another artist, a Nashville singer-songwriter, Jon Byrd, who also became caught up in the vortex and the momentum of all this. Whenever we hear Jon perform—and we often get this treat in Nashville—we think about the classic country performers that Rita’s father and Uncle Dale so loved and that Rita grew up hearing in the home and on every trip taken in her Dad’s pick-up truck before he passed. When Rita told Jon about the planned fundraiser in Arnoldsville, he immediately agreed to play at the event. He was all in. Hold this.

Finally, I invite you to think about the big, old, hairy, hoary, unwieldy and most dangerous topic I’ll cover in this already too-long account: God. Jesus. Good Lord, I said it. Oh my.

Rita and I aren’t pious people. We’re not even very religious people. And we’re certainly not spending so much time and energy trying to save this abandoned chapel simply because we want one more church in the world fixed up so that pious people can do pious things in a pious place. No.

San Filippino is named after its patron saint, Philip Neri. “Filippino” means “the little Philip,” or, more precisely, in the context of the town of Castiglion Fiorentino, it means the littler, or smaller, church among the two churches in town dedicated to Saint Philip Neri.

Neri is known as the “happy saint” and the “joyous saint.” He’s famous for his sense of humor and for his humility. He became a saint for many reasons, but mostly because he was among a handful of Counter Reformation priests in the 1500s who were successful in refocusing the Catholic Church on the needs and aspirations of ordinary folk. He rejected the gilded, corrupt hierarchy of the church in his day and instead embraced layperson leadership and the arts and education and empowerment for all. He commingled musical performances, public lectures and charitable projects with daily masses, daily communion and liturgical life.

Little San Filippino Chapel was once a thriving church and community center where priests and laypeople and artists and scholars and all the townspeople of CF, from all walks of life, lived and worked and came together to laugh and learn and worship and serve others.

That’s what we’re trying to restore. That’s what this is all about. Only now, it’s not just the townspeople of CF that will once again live and work and teach and serve in this little chapel and its associated workspaces and apartments. It will be Stan Mullins. And John Cleaveland. And Alan Campbell. And Erin McIntosh. And Jon Byrd and Aunt Fern and countless other folks just like them. Just like you. You may not be a practicing artist, but, like most everyone else in attendance at this event, you could probably benefit from a sabbatical of your own in Tuscany.

Tim Richardson is the husband of Rita Richardson, President of Friends of San Filippino. 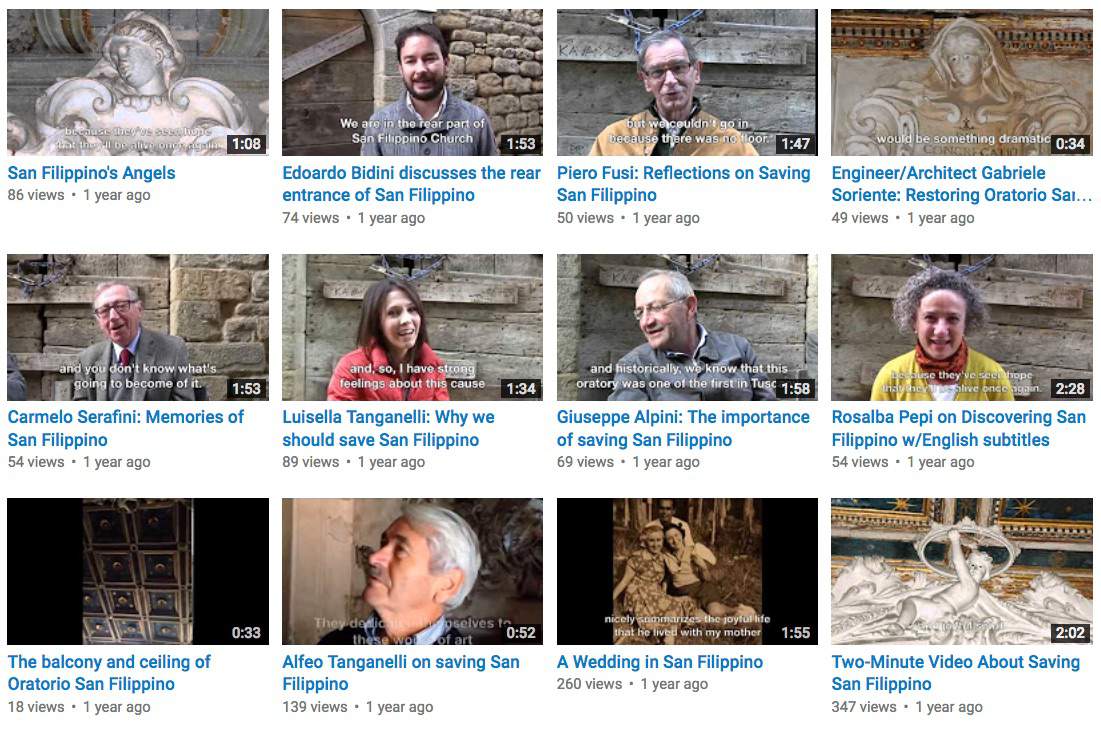 Stay abreast of our progress

WITH GENEROUS SUPPORT FROM